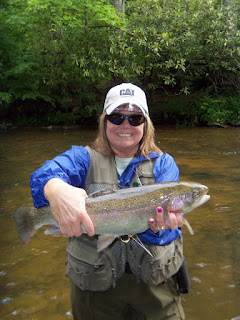 So you thought the trout in East Tennessee and Western North Carolina were relatively small?  Well, think again!  There is at least one place in the waters of this region where that is absolutely not true--The Refuge near Blowing Rock, NC.  This strip of water that runs through private land is managed incredibly well for the benefit of Brown, Rainbow, Brook, and Golden Trout.  This, vicariously, benefits those of us who love to catch them on a fly rod. 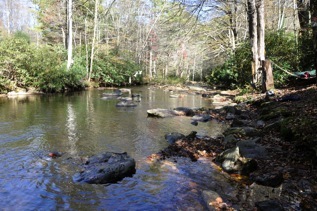 I recently had the opportunity as a surprise birthday gift from my husband to fish this stretch of water.  The Refuge is located on Boone Fork Creek, one of the top-rated catch-and-release streams in the area.  Set amidst the beauty of the Blue Ridge Mountains, this Orvis-endorsed fishing experience awaits those who wish to catch large, really large trout!  Since 1988, The Refuge has provided trout with a sanctuary, a refuge, in which they are provided with the habitat that they need to grow to monster size, protected by the owners, Terry and Renee Troy, and by the guides and fishermen (and fisherwomen) that frequent these waters.  No fish are ever taken from these waters unless they have been injured, for instance by the spear-like beaks of a blue heron. Although, to be honest, I bet it's quite a sight to see a blue heron try to take on one of these monster fish!  I wonder if the fish ever win!  I thought it interesting that, according to Terry Troy, these fish have full run of Boone Fork Creek, but most of them, except for the Brookies which travel upstream during the summer, choose to stay.  The extra aeration provided in this stretch of water probably plays a large part of that, especially when temperatures rise in the warmest parts of the year.

When we got out of the truck at a beautiful, but unassuming, home and guest cottage near the river, I was excited by the possibilities of what might lay ahead.  I had envisioned a trophy-section of a creek in which our guide, Luke Edwards (lukesedwards@gmail.com) had promised my husband he could get us on some trophy-sized trout as my birthday present.  At that time, I was unaware of where, exactly, we had been headed as part of the birthday surprise.  After donning our equipment and placing my net in the back pocket of my fishing vest, Luke looked at me and said, "You know, I've got my guide net.  You won't need that net today if you don't want to fool with it."  He was too polite to say it at the time, but that trout net I carry would have been absolutely useless on this adventure, because none of the fish we caught would have fit in it!


As we made our way toward the river, onto the deck area of the house and cottage, the creek itself was still out of sight, nestled in and behind shrubbery of rhododendron and other similar mountain underbrush which grows beneath the canopy of hardwoods and pines.  We met Terry Troy, an extremely hospitable and likable fellow, and talked with him a few minutes before making our way down the short path toward Boone Fork Creek.  I remember as I made that last little turn when the creek came into view, being absolutely stopped in my tracks by what I saw.  Below me in a stretch of creek maybe 30 feet wide were scores of dark silhouettes of fish in the water--really large fish!  Also found amongst those dark silhouettes were ghost-like outlines of a fish I've never seen before--the Golden Trout, which is native to the high country of the Sierra Nevada Mountain Range in California.  We saw probably 12-15 of those beauties on this day, although we never did get one to take our flies.  But we did get plenty of other trout; Rainbow, Brown, and Brook; to latch on and give us an amazing experience.

The weather cooperated beautifully for our time on the river.  The skies were overcast for most of the morning and about half way through our time there a light drizzle began to fall.  I seriously think this drizzle was the biggest blessing of the morning.  After the rain began, fish began hitting almost faster than we could comfortably bring them in.  There were many times when my husband and I both had fish on and Luke was trying to net fish in two different locations!  What an experience!  I fished flies I'd never used before on this trip.  Many of the tiny flies I usually fish on the South Holston or in the mountain streams in the Smoky Mountains would probably not have been noticed by these huge trout.  I love to fish using dry flies, so Luke kept me primarily with dry flies on my line.  The first fish I caught hit at a mayfly pattern that I had used before, but most of the flies we used on this day were unfamiliar.  One fly that was especially effective was a brown crane fly in probably a size 6 or so.  I caught and landed a couple fish on that fly before the biggest fish I've ever had on any line took the fly.  He was a huge brown, smart and apparently accustomed to getting off the line in this stretch of water.  I hooked this large brown and he immediately took line, running upstream, as brown trout are known to do.  I fought him for a long while and then he took out upstream one last time.  This time, he wrapped under a rock and a rope attached to the aeration system and continued to fight to escape.  At this point in time, Luke took out upstream after him, knowing that he was going to use that rock and rope to get off the line.  As soon as Luke got near him, that fish literally swam around our guide's feet three times, wrapping that line around him like an old pro.  Obviously, that was the end of that!  He broke the line (3X tippet) and took that crane fly with him.  Wow! What a cool thing to see!  Another exciting fly that we used was a wet fly called the New Trick, purchased at Foscoe Fishing Company.  This bright green wet fly caused quite a stir.  We tied this on late, but boy, I wish we'd have tried it earlier.  This New Trick was the only thing the Golden Trout looked at all day.  I don't know if it made them mad or what, but I'm sure, given another thirty minutes to an hour, one of us would have landed a Golden.  But we were at the end of our time on the river and had to leave the Goldens for another day.

All this fishing excitement was complimented by a nice stay at Chetola Resort in Blowing Rock, NC.  This lovely 87-acre property overlooks the small private lake on which swans and wood ducks make their home and raise their young.  This lake is full of brim and other fish, but those were not our interest for this trip.  The grounds of Chetola Resort are nestled in the Blue Ridge Mountains and are exquisitely maintained, offering a lovely spot for romantic walks around the lake.  Unfortunately, the Bob Timberlake Restaurant had experienced a fire last year and the renovations to this historically preserved structure were not yet complete, so we ventured into Blowing Rock for dinner and drinks, which was not necessarily a bad thing!  Our choice for the evening was The Best Cellar, set amid lush gardens, carefully tended to enhance your dining experience.  The food and the service were outstanding, and we enjoyed halibut that night, dusted with pistachios and accompanied by a blueberry sauce--excellent in all respects!  Blowing Rock is a nice quaint little town, and we walked the streets visiting a few shops along the way, making this a nice addition to an already awesome surprise birthday weekend.

One thing to note though, you can also stay at the guest cottage at The Refuge.  It's a quiet little cabin right there at the creek, so unless you really want the resort experience, my suggestion would be to rent that beautiful little cabin at The Refuge.  That's what we will do when we return to fish these waters again!
Posted by Tami at 6:43 AM 2 comments: Links to this post


Completed hiking "All the Trails in the Great Smoky Mountains National Park" on October 15, 2016. #900-miler

Tami
Who am I? I am an avid hiker and also love to fly-fish, especially in small mountain streams. I've been married for over 25 years and have raised two great kids. Until recently, I was a science teacher at a progressive high school in Tennessee, primarily teaching Anatomy/Physiology and Microbiology. I love teaching and trying to make science interesting for my students. This past year, I became Science Instructional Coach for my school district, and as such, work with all the science teachers in the county. My love for science spills over into my private life as well. The outdoors has always been my favorite place to be! My favorite place on earth is in the Great Smoky Mountains where I just feel like I am where I'm supposed to be. My alter ego was once an English teacher, and I supposed it is this part of me that makes me write. This is something I simply have to do to keep my sanity at times. Hopefully you will enjoy some of my ramblings.