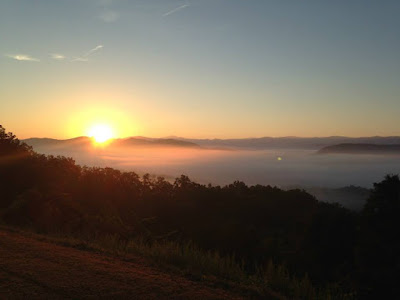 As we are closing in on our goal of completing all the trails in the Smokies, there's one trail we had been putting off for various reasons. That is the "lollipop loop" out of Twentymile to Gregory Bald and back down. We are pretty used to a 17-mile hike at this point in our venture, but this 17-mile loop meant climbing up some pretty steep trails to get to one of my favorite spots in the Park, Gregory Bald. We had also read the story in the Brown Book about a group of bear hunters from long ago who had once been stranded by high water on that side of the mountain and almost starved before making their way out. Many times we had decided not to do that loop because of recent rains or impending weather. Other times, we had just opted to do something else because of that climb. This time, we were really about out of options.

We had tried to figure out how to do it from the Cades Cove side and do it as a shuttle. In fact, one time I had even contacted friends who had said they'd be willing to do shuttles for us, but even in talking it over with them on the phone realized just how silly that idea was--that is one tough shuttle. What we needed to do was to suck it up and JUST DO IT, as Nike would say! And that is what we did! At least we picked a gorgeous day in which to make the attempt! 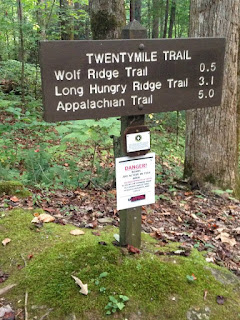 This loop begins at the Twentymile Ranger Station on the Twentymile Trail and comes complete with a warning of bear activity. Within just a few minutes of walking, you come to the intersection with Wolf Ridge Trail and at this point, a decision has to be made. Options are to climb up Wolf Ridge Trail for 6.3 miles and arrive at Sheep Pen Gap after an ascent of about 3300 feet (most of the climb is in a 3.5 mile stretch). I had assumed that is the path we would take. The other option is to go up Wolf Ridge for just a little over a mile then travel across the bottom of the loop first on Twentymile Loop Trail for 2.9 and THEN begin the real ascent on Long Hungry Ridge. This direction of the loop takes you up another really steep climb in the middle of Long Hungry, but it happens after you've already hiked 4.5 miles before you start it. Then at the top of Long Hungry, you are faced with the brutal .7 mile section of Gregory Bald Trail that takes you out to the bald. When final decision time came, we deferred to Liz Etnier, author of Day Hiker's Guide to All the Trails in the Smoky Mountains. She told us in her book the loop was a little easier going up Long Hungry, so that is what we did. I don't know if she is correct in her assessment, but we survived it, so all is well. 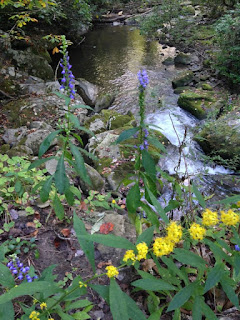 I do love hiking this time of year. The fall wildflowers adorn the trails and give reason to pause and snap a few shots. The only problem is, there are so many of them that are not in my two wildflower books, I do not know their names. I can, however, still enjoy their beauty! In addition to the flowers, the trees are also beginning to put on their colorful show. At the highest elevations, the leaves were just beginning to turn, giving hope that the hot summer was indeed fading away.

After our recent encounter with Mama Bear on Hazel Creek Trail where we were bluff charged twice, we were mentally prepared for bear again. Coming out across the Twentymile Loop Trail, we did hear bear on two different occasions in the woods a good distance off trail. Those bears, we never did see. There was one unnerving moment near the end of Twentymile Loop though, that we heard a screaming in the distance that wasn't human, but echoed of terror and pain. I have no idea what that sound was and I hope I never hear it in the woods again. Needless to say, we quickened our pace significantly. There would still be one more bear encounter on this day.


The early stretch of Long Hungry Ridge was a pleasant rise through the forest which passed by Backcountry Campsite #92. This is a site I would like to remember. It's a large campsite with lots of downed trees to sit on and lots of places to pitch tents, nestled near a creek which provides freely flowing water. This would be a nice site to revisit for a campout sometime.


Just past 92, though, the trail took a definite turn, seemingly straight up! The condition of the trail was fine except for a bit of overgrowth near the top which at least helped with the climb, but I would be lying if I told you I wasn't struggling by the time I reached the top. The occasional view of trees beginning to be clothed in their fall finest was a welcome respite from the continual incline.  The sight of that flat spot at the top known as the Rye Patch was pleasant indeed!

The bulk of the elevation change now behind us, we made a quick trip to the end of Long Hungry Ridge and were soon met by the trail sign for Gregory Bald Trail with the inscription that we were now only .7 miles from the top. However, we'd been here before, so we were well aware that that .7 was going to be tough as tired as we already were. Pressing on with our eye on the prize, we trudged up Gregory Bald in anticipation of it opening up to the almost 360 degree vistas that we knew awaited us.  The mantra that goes through your head when your body is spent but you know you are almost there is a dialogue of sheer determination. "One foot in front of the other!" "You CAN do this!" "Almost there!" "It's going to be SO worth it!!!" And, indeed, it was!

Soon the trail opened up to what we had been looking forward to all day! Expansive vistas overlooking Cades Cove on a stunningly beautiful day! 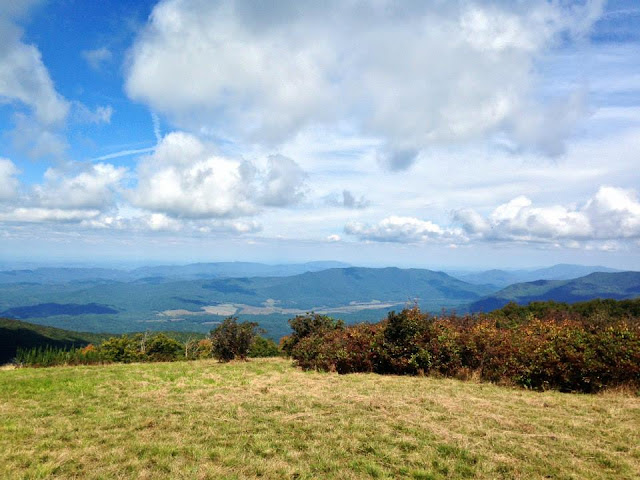 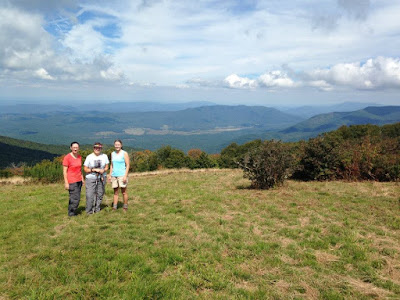 Every time I travel through Cades Cove, I look up to Gregory Bald and think how I have stood there on that bald spot on the top of that ridgeline. This day, I stood on that bald and envisioned myself down in the Cove. It's a good feeling, especially after making the more difficult climb up out of Twentymile. What a day! 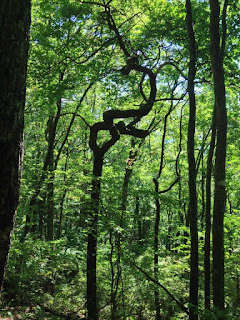 I could have stayed up there all day, and one day I do want to spend the night up there to see sunrise/sunset from the bald, but on this day, we still had miles to go before we slept. After enjoying lunch on the bald and soaking up the views for a short time, we began the descent down Wolf Ridge trail. It seemed much like Long Hungry Ridge, so I'm not sure which would have been the easier direction to have done this loop, but it really didn't matter now. The highlight of our descent was coming up on another Mama Bear and her cub. This time, they were together (thankfully) and above us on the ridge eating acorns from the forest floor. Little cub saw us and quickly scampered higher on the ridge. I'm quite sure Mama saw us, but she was too busy gorging herself on the mast to pay us any attention. She just kept on munching which was exactly what we wanted her to do. We moved out of their way and never did get a good picture.
Wolf Ridge comes alongside Dalton Branch about half way down and the rest of the hike includes those glimpses of cascades and the sounds of rushing water that create such peace along a creekside hike--not a bad way to end the day. As the sun became lower in the sky, contrasts in the forest stood out and it was obvious that days are getting shorter. Fall is upon us, so many of our long remaining hikes to reach our 900 will have to wait until spring. Perhaps if weather will cooperate, unlike it did today as I sit writing about hiking instead of hiking in the torrential rains associates with Hurricane Joaquin, we can still get a couple more in this fall. One of us was supposed to have finished today, but that will have to wait. Maybe next weekend! Here's hoping! 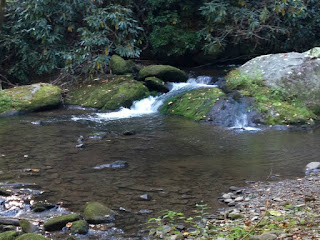 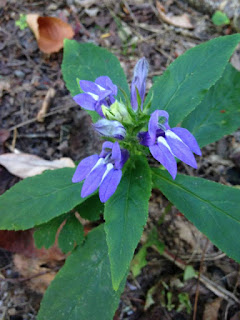 
Completed hiking "All the Trails in the Great Smoky Mountains National Park" on October 15, 2016. #900-miler

Tami
Who am I? I am an avid hiker and also love to fly-fish, especially in small mountain streams. I've been married for over 25 years and have raised two great kids. Until recently, I was a science teacher at a progressive high school in Tennessee, primarily teaching Anatomy/Physiology and Microbiology. I love teaching and trying to make science interesting for my students. This past year, I became Science Instructional Coach for my school district, and as such, work with all the science teachers in the county. My love for science spills over into my private life as well. The outdoors has always been my favorite place to be! My favorite place on earth is in the Great Smoky Mountains where I just feel like I am where I'm supposed to be. My alter ego was once an English teacher, and I supposed it is this part of me that makes me write. This is something I simply have to do to keep my sanity at times. Hopefully you will enjoy some of my ramblings.